What's In a Name?

This past weekend, I had two memorable interactions. One was good and the other was, eh...it was okay. The crazy thing is, there was just one small thing that made the difference in the way the interactions began and concluded. One. Small. Thing.

Interaction #1
His name was Leonidas. I was so set on carrying my own bags, but he made it a point to get them out of my hands before I could even reach into the smaller one where I kept my Super Woman cape. "Very well", I thought to myself, "I'll let you win this time. I'm still Super Woman, though. Just so you know." We walked to the car and I asked him his name, he answered "Leonidas". And in this thick Kentucky accent that I must've picked up somewhere between Union and Harlan County, I repeated back to him "LEE-UH-NAR-DUS?" He looked at me and immediately asked me where I was from, and the conversation went on from there. We talked about life,spirituality, happiness, traveling, family, pizza, books- we covered a lot of ground in a little time. He has a 14 year old son, who speaks five languages and is very much involved in the arts. Leonidas himself has traveled all over the world and used to work in the world of dentistry. He believes in spirituality over religion and loves Cole Haan.  By the end of the conversation, I had managed to get some pizza, lemon pound cake, and valuable life lessons- all because I asked him what his name was.

Interaction #2
I don't know her name. She was my nail technician. I'd had an extremely long day and all I wanted to do was have a glass of wine and go to bed...but I went to get my nails done instead. She wore a gold necklace with a Virgin Mary pendant and hospital blue scrubs (you know exactly what shade of blue I'm talking about). I told her exactly what I wanted, and she instructed me to pick out a color. Now... I am about to admit to something that I am not proud of at all, however, it is the truth and this story might not be the same if I omit this detail. So, we sat down and she asked me where I was from. I told her, "Kentucky". She proceeded to say something about Kentucky, but I couldn't really understand and after asking her to repeat herself twice, I grew a little impatient with trying to understand, so I just smiled and nodded...still having no clue what she was saying. We sat in silence for most of my appointment. I purposely chose not to carry on a conversation with her because I was too tired to try and understand what she was saying through her accent, and I was also a little irritated that there were three bottles of wine behind her and I was offered none. Hey, don't judge...we've all been there. By the time she was done, I was very pleased with my nails, but ended up paying double of what I was expecting because the service she provided was actually NOT the service I had asked for. And then to top it all off, I felt that I had been strong armed into a tip when she looked directly into my wallet at the cash that was sticking up from the sea of old receipts and business cards, and TOLD ME to give her cash for her tip.  I was standing there thinking... "She is really trying to stick me for my paper!"

I left the first interaction with pizza, life lessons, and a happy heart. SHE WON. I left the second interaction with pretty nails and a sad sense of self. SHE LOST. I just kept asking myself... "Was the accent really that bad? Was I really too tired to talk or was I just being a jerk?" I understand that sometimes we just want to be left alone or to not have to be "on", but I had been having such a great day and wonderful interactions with people that day, and I chose not to ask ONE person their name and I got played to the left, right, front, back, and center. And, I just can't help but feel, the difference between the two interactions was in the asking of a name. So, I suppose THAT is what's in a name. 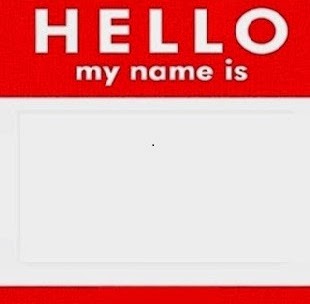