For those of you who do not know, I have a younger brother. His name is Xavier. Brother, if you're reading this... Hi! Love ya! We grew up in the same household with the same expectations and opportunities, and we are just about as different and alike as day and night, literally and figuratively. However, it is the differences between us that help us to learn from each other. And when I was about 17 years old, I learned a very important lesson from my brother.
My brother and I have both experienced life in different ways. We have traveled different roads and made different choices. Regardless of the differences, it was the latter that my brother helped me to realize I lacked in my life : choice. All my life I had done what was expected of me. I never stopped to think that I had a choice- the thought literally never crossed my mind. When my brother would do what he wanted and not what was asked or what was expected of him, I would ask, "What is wrong with him? Why does he think it's okay to just do what he wants?" And then one day, it hit me... Why didn't I ever think it was okay to do what I wanted? Did I even know what I wanted? No, not really..I had never thought about it. I was always under the impression that the way of life was simply doing what you were told or what was expected of you. Now, don't get me wrong... I wasn't a robot and I wasn't doing anything that I absolutely hated. I was always given the liberty to be my free, fun, and creative self. I was a happy child. I just... I had never consciously thought about the difference between my own wants and needs, and the expectations and directions that were given to me. My mind was blown. This was a totally new concept to me. I asked some of my friends if they knew about this, as if it was some new thing I'd seen on an infomercial, and while they were understanding of my position, I still felt as thought I had been living under a rock. CHOICE. Why didn't anyone tell me about this sooner?! You mean...I can make those on my own? Are you freakin' kidding me right now, man?! And everybody has been knowing about this except for me?! No way. I couldn't even believe it.

So here I am now... 27 years old. Making choices and asking myself what I want. After about 10 years, I think I am starting to get the hang of it. Interestingly enough, peeling back new layers everyday, embracing my own freedom. This year I have made a decision to ask why, to seek more understanding,  and to also be okay with saying "I don't know". And those things, while seemingly small, are incredibly freeing.

Go a little further than the "hmmm..." and see where it takes you.

I never want to stop growing. I want to always explore. I want to always evolve. There is too much to do and too much to be in this world, for us to remain the same and never challenge the world or ourselves. I have the power to make choices to change, to evolve, to explore, to grow, and to be who I am outside of who the world tells me I should be. Thank you, brother. 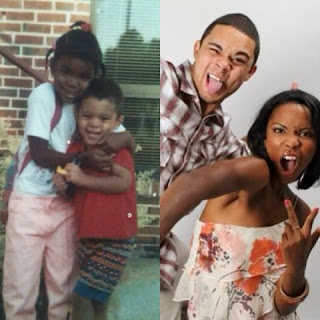