The Woman in the Big Black Truck

In conversations about the homeless, this question always comes up:

"So, should I give money to them or not? How do I know they're not going to buy alcohol with it?"
My response is always this:
"If you are going to give, use your own discernment and do it from your heart without judgement. It is not up to you to judge."
That response can be applied in many different scenarios. For example- I think that most of us would be much more willing to give a few dollars to someone who appears to be in need, rather than someone who appears to be doing fairly well. But honestly...who are we to judge who is doing well, and who is not?

In an effort to bring a smile to someone else's face (and maybe, also, to make myself feel a little better about purchasing anything in a drive-thru), I have been paying for the car behind me.
-Now, before I proceed,  let me be clear- I am not doing this because I have so much money and I just don't know what to do with it.-
Well, the other day, I pulled up to the window and right before I told the cashier, "I'd like to also pay for the car behind me", I looked in my rearview mirror and realized that it was a big, shiny, black Denali. IMMEDIATELY, and ashamedly, I pulled out my gavel and started judging. My thoughts were as follows: "Hmmmm...middle aged, white woman. Designer shades. Car seat in the back. She's probably a stay at home mom. She's skinny too, so she probably goes to yoga, pilates, or zumba  classes with all of her cool, stay at home, soccer mom friends. Probably counts every calorie, except for all of the wine she drinks. Or maybe she's skinny because she doesn't eat, and counts wine as all the calories she needs. Whatever, who cares about why she's skinny...she's a suburban mom in a big, shiny truck. I'm not paying  for her."
::pause::
::reflect::
::back to thoughts::
"WOW. Really, Djuan Trent??? REALLY??? You are a rude little girl. You don't even know this woman. How dare you judge. You are doing this because you want to make someone smile. You are here to enrich, NOT TO JUDGE."
::back to reality::
I gave my card to the cashier, and told her that I wanted to pay for the woman behind me. She looked at me, looked at the car behind me, and said, "Are you sure?" I had a mini-panic attack when she asked me that. I began thinking, "Oh my goodness. This woman just placed orders for her whole office and now I am about to empty my bank account, trying to be the smiley-good deeds-girl in the drive thru. Am I over my head? Why would she ask me that? Is the panic showing on my face??? Oh gosh. Oh gosh. Do I say yes or no? Shoot."
I snapped back into reality and said, "Yes, yes I'm sure." The cashier then proceeded to say, "That is very kind of you, I'm sure she will really appreciate that."
I drove away feeling somewhat disappointed in myself for the judgement I had initially passed on the woman behind me, in the big black truck. I judged her based on societal projections, material possessions and appearance. But I had no idea who this woman was. Did she even have a job? Or kids? Maybe she was the nanny? Maybe she has a wonderful life and she loves it, or maybe she has a seemingly wonderful life and she hates it? Did she wake up this morning, wishing that she hadn't? Was she planning on paying for the people behind her? There were so many other things I could have focused on, in that moment in the drive-thru...but instead, I chose to judge. I was embarassed. However, I was still able to smile, knowing that, I worked through my judging, put the gavel away, and still managed to put a smile on the cashier's face, and hopefully the woman in the big black truck as well.

I am not sure if judging comes by human nature or it is it a learned behavior. But what I do know, is that I don't want to live my life judging everything and everyone around me. We all have gavels. Some of us carry them around in our hands, ready to judge everything and everyone around us; and some of us keep them in our purses, pockets, or glove compartments, so we can judge whenever we are ready. I am going to put mine in a box. Judging can sneak up on us, sometimes we don't even realize we are doing it. But what if we all lived a little more consciously and aware of our judging? What if we all stopped ourselves, just as soon as we started? It might be worth trying. But hey, what do I know? I'm just one person trying to enrich the lives of those around me...one less judgement at a time. 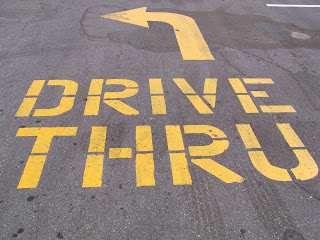