So... I'm standing in line with my seven year old cousin (Dezi), waiting to see Santa. The closer we get to the front of the line, the more antsy and nervous he seemed to get. Finally, he turned to me, and the following conversation took place...

Dezi: Is this the real Santa?
Me: Um, yes. Of course it is! Who else would it be?
Dezi: (clearly distraught by my answer) AW MAAAN!
Me: Aw man, what? Did you not want the real one?
Dezi: If it's the real one, he's going to know I was bad this year!

Well, well, well... What do we have here? A seven year old who would rather embrace a "fake" Santa who doesn't really know if he has been naughty or nice, rather than the "real" Santa who actually knew he had been naughty. Hmmm...let's take a minute to digest that.


The conversation was so uncanny and humorous to me. I got a good laugh out of it, but I also took a moment to teach my seven year old cousin a very valuable lesson.
"You know, Dezi, the problem here is not whether or not this is the real or fake Santa. What is important is that you tell the truth and that your behavior is something you can be proud of, so that you don't have to worry about who knows if you're naughty or nice. You should always tell the truth. And if you don't want the real or the fake Santa to know if you were naughty, maybe you should just be nice."

When I was in grade school, I remember receiving a bookmark that read:  "Character is who you are when no one's looking."  So, in this case, maybe we could say "Character is what the real Santa knows about you." 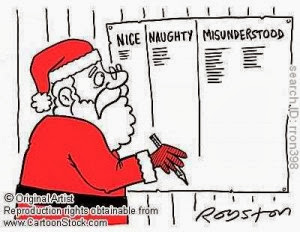